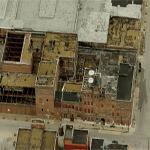 "Owned by several companies throughought the decades, the site of Falstaff Brewery No. 10 was first used for brewing beer in 1853. Like many early breweries in St. Louis, the location was chosen because of a cave on the property that allowed the owners to brew lager beer all year round. With the advent of modern refrigeration, the cave, commonly known as Consumers Brewery Cave, was eventually retired from service, although it served as an air raid shelter during WW2. Acquired by Falstaff in a merger in 1956, it became the company's No. 10 Brewery and produced beer for years. The multiple, decaying buildings of the Falstaff Brewery currently sit abandoned above the flooded cave."
Links: www.falstaffbrewing.com
983 views