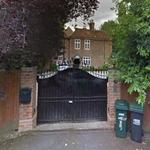 By titanic123 @ 2015-07-21 06:33:19
@ 51.675566, -0.428881
Watford, United Kingdom (GB)
Fanny Craddock was the worlds first television cook. Throughout the 1950s, 60s, and 70s Fanny Craddocks name was instantly recognizable. At the height of her national fame in her home country of the UK, she turned a theatre stage into a kitchen and cooked in front of an audience of 7000 people. Fanny Craddock was later replaced by the younger anf far more modern cook Delia Smith, after Craddock had a fall from grace after her display of ill manners, and temper towards Gwen Theroke. The event come about where a normal housewife won the opportunity to put her own menu together for a top restaurant, when Fanny heard what Gwen was cooking together she instantly started pulling faces, argued with her and criticized her menu. After this Fanny Craddocks television career with the BBC was over.
554 views