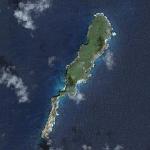 For years the U.S.Navy has used Farallon de Medinilla for military and bombing exercises (cross shaped groups of buildings on the island may have something to do with the exercises). In a 2002 lawsuit the Center for Biological Diversity charged the Navy with the destruction of wildlife habitat on the island. A subsequent court ruling ordered the Defense Department to cease bombing exercises on Farallon de Medinilla until they came in compliance with the Migratory Bird Treaty Act.
Links: www.globalsecurity.org
1,104 views