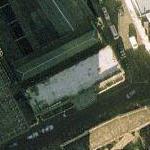 The station was opened on 10 January 1863 as the terminus of the original Metropolitan Railway, the world's first underground metro line. The station, initially named Farringdon Street, was originally located a short distance from today's building. The line ran from Farringdon to Paddington, a distance of 4 miles (6 km). The station was relocated on 23 December 1865 when the Metropolitan Railway opened an extension to Moorgate. It was renamed Farringdon and High Holborn on 26 January 1922, and its present name on 21 April 1936.
Links: en.wikipedia.org
791 views