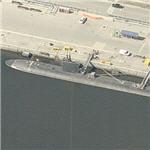 The final 23 boats in the series, referred to as "688i" boats, are quieter than their predecessors and incorporate a more advanced combat system. These 688i boats are also designed for under-ice operations: their diving planes are on the bow rather than on the sail, and they have reinforced sails.
Links: en.wikipedia.org
818 views