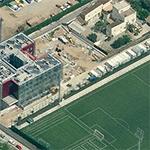 Located in Sant Joan Despí and covering 136.839 m2 it is used since 2006 for youth team training and matches and since January 2009 for the first team training. It is also used by many of the other sports teams at the club including Basketball, Handball and Futsal who use facilities such as the multi-sports pavilion. Now that this facility is fully operational, all the youth teams that previously used the Camp Nou facilities, mainly the Mini Estadi and the Palau Blaugrana, train there.
Links: en.wikipedia.org
2,234 views