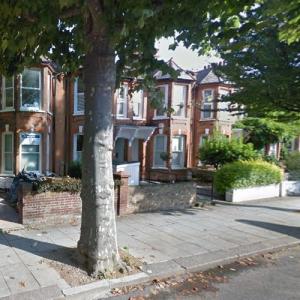 By Gorecki @ 2015-06-09 09:00:21
@ 51.5166942, -0.2206643
London, United Kingdom (GB)
This is where Fearne Cotton, the British television and radio presenter, lives with Jesse Wood. She joined BBC Radio 1 in 2005 before leaving in 2015 after ten years. She has presented many television shows including Top of the Pops, Celebrity Juice and The Brit Awards. Jesse Wood is the son of Ronnie Wood. Known professionally by her maiden name Fearne Cotton she has presented television programmes such as Top of the Pops and the Red Nose Day telethons. In 2007, she became the first regular female presenter of the Radio 1 Chart Show, which she co-hosted with Reggie Yates for two years. She went on to present her own Radio 1 show, airing every weekday morning from 2009 to 2015.

In 2007, Cotton presented The Xtra Factor, an ITV2 spin-off from the main show. She hosted the show for one year before being replaced by Holly Willoughby for the following series. From 2008 to 2018, Cotton appeared as a team captain on the ITV2 comedy panel show Celebrity Juice alongside host Keith Lemon and fellow team captain Holly Willoughby. She quit the series in December 2018 to pursue other projects. In 2018, Cotton began presenting Happy Place, a podcast available to online streaming platforms.

Fearne Cotton has a net worth of $4 million. Cotton took her first career steps in 1998, when she became a presenter of several children's shows. At the time, it was the very familiar Disney Club that catapulted her to international recognition. Already famous and beloved among youth, she went on to present more kids show projects like Draw your own Toons, Mouse, and Eureka TV, Fingertips and Smile. Other of her kid TV credits include Diggit, Petswap, The Saturday Show, and Only in America. As for her mainstream film projects that placed her at the top rank of the presenters club since 2006 were Love Island, Eurovision Song Contest, Brit Awards, Oscars, Nelson Mandela: Happy 90th Birthday, Golden Globes, Oscars 2009: Live from the Red Carpet, and The Truth about Online Anorexia. In addition to her abundant TV work, Fearne Cotton has also established herself as a great philanthropist taking part of such charity activities as CoppaFeel!, Post Pals, Macmillan Cancer Support, Children in Need and Red Nose Day. Thanks to her professionalism, experience and eccentric presenting personality, she became the first female presenter in BBC's Radio 1 show in 2007.
Links: en.wikipedia.org
19,371 views