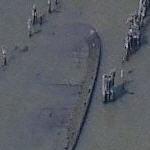 By kjfitz @ 2007-06-14 13:43:33
@ 40.699087, -74.040901
Jersey City, New Jersey (NJ), US
The ferry Ellis Island was built in 1904, and decommissioned in 1954. The island itself was transferred to the control of the National Parks Service in 1962, and the ferry sank at its slip there six years later. Forty percent of Americans trace their roots to an ancestor that came through Ellis Island, most having left the island via the ferry Ellis Island. The ferry took them to the Central Railroad of New Jersey terminal in Jersey City, where they transferred to trains that would take them to inland states in the interior of the country. In fact, the ferry terminal on Ellis Island is actually part of New Jersey rather than New York — in 1993 the U.S. Supreme Court ruled that the south side of the island belonged to New Jersey because all the landfill was in New Jersey waters.
Links: www.lostmag.com
5,110 views