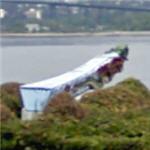 The Empress of Japan sailed between Vancouver and the Orient between 1891 and 1922. The original figurehead was saved by the Vancouver Daily Province and presented to the Park Board in 1928. In 1960 the badly deteriorated original was replaced with a fiberglass original . The original is kept at the Vancouver Maritime Museum.
Links: vancouver.ca
479 views