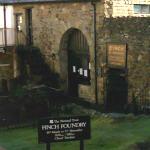 By Parabellum @ 2011-11-01 06:30:17
@ 50.730586, -3.926082
Sticklepath, United Kingdom (GB)
Finch Foundry is a 19th century water-powered forge situated in the village of Sticklepath near Okehampton, Devon, England and was active until 1960. It was originally used to produce agricultural and mining hand tools, but the Foundry has been a National Trust property since 1994. It contains examples of a tilt hammer, drop hammer, and shear hammer all powered by the water wheels. The Trust maintains it in working order and demonstrations of the tools are given every hour.
Links: en.wikipedia.org
449 views