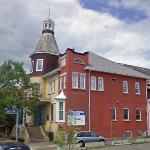 Built in 1910, the Finnish Labour Temple was at one point one of the largest workers' halls in Canada in addition to being the centre of Finnish cultural and political life in Northwestern Ontario. Currently, the hall houses the historic Hoito Restaurant, the offices of the weekly Finnish-Canadian newspaper Canadan Sanomat, a museum, and features a large stage, dance floor, and hall as well as meeting rooms for various groups. The Finnish Labour Temple serves as one of the main locations of the Bay Street Film Festival.
Links: en.wikipedia.org
608 views