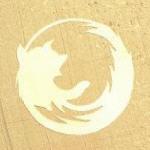 By kjfitz @ 2006-11-24 16:31:20
@ 45.122818, -123.114005
Amity, Oregon (OR), US
Constructed by local Firefox fans and the same team that created the Firefox mural from cornstarch and kool-aid and launched the Firefox weather balloon, the Firefox Crop Circle project shows that we have so much passion for Firefox that we want it to be visible from space!

Planned in under two weeks and completed in under 24 hours, the crop circle had a final diameter of 220 feet. We constructed the circle in an oat field near Amity, Oregon, where it was completely invisible from the road but unmistakable from the sky. Our team consisted of 12 people, mainly OSU students, and we carefully stomped down oats from 3:30pm Friday afternoon until 2:30am, putting on the finishing touches between 7:30am and 11:00am Saturday, August 12.

Matt and John, Mozilla video interns, came up with the idea a few weeks beforehand. Fueled by the enthusiasm of Asa Dotzler at Mozilla, suddenly the crop circle was within reach. While at OSCON 2006 in Portland, the three of them ran into members of the OSLUG, and things really started to take shape.
Links: firefoxcropcircle.com
4,802 views