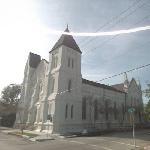 By kkeps @ 2010-04-08 09:55:37
@ 29.30496, -94.788673
Galveston, Texas (TX), US
The First Presbyterian Church was founded on New Year's Day in 1840, as the first church in Galveston. The first church building for the congregation was completed in 1843 on the southwest corner of 19th and Church where it stood for 30 years until displaced by the current building. The current church building was constructed beginning in 1872 with the construction of the chapel and with the sanctuary completed in 1889. The church was designed by architect Nicholas J. Clayton in a Norman phase of the Romanesque Revival style. The church survived the great fire of 1885 and served as class rooms for student from schools which were burned. The church survived many storms over the years but was damaged significantly during Hurricane in 1961 but was restored and reopened in 1962. The church building was damaged again significantly by Hurricane Ike in 2008 and reopened in late 2009 with work continuing in its restoration.
Links: www.waymarking.com
523 views