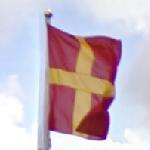 By alfjon @ 2010-01-22 05:59:02
@ 56.046134, 12.693435
Helsingborg, Sweden (SE)
Scania (About this sound Skåne in Danish, Norwegian and Swedish) is a geographical region on the southernmost tip of the Scandinavian peninsula, a province (landskap) in the Kingdom of Sweden, before 1658 a province in the Kingdom of Denmark and part of the historical lands of Denmark. To the north, it borders the provinces Halland, Småland and Blekinge, to the east and south the Baltic Sea, and to the west the Oresund strait. It is part of the transnational Oresund Region and the historical region Skåneland (Terra Scaniae or "Scania land"). Around 130 km long from north to south, Scania covers less than 3% of Sweden's total area. The population of approximately 1,200,000 represents 13% of Sweden's total population.