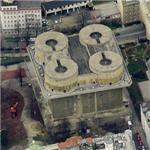 By kjfitz @ 2008-06-30 15:25:33
@ 48.198857, 16.393202
Vienna, Austria (AT)
Flak towers (German: Flaktürme) were large anti-aircraft gun blockhouses used by the Luftwaffe to prevent overflights of key areas in certain cities in World War II. They also served as air-raid shelters for tens of thousands of people and to coordinate air defence. With concrete walls up to 3.5 metres thick, these towers were considered to be invulnerable to attack with the usual ordinance carried by Allied bombers, though it is unlikely that they would have withstood Grand Slam bombs which successfully penetrated much thicker reinforced concrete. Aircraft generally appeared to have avoided the flak towers.

G-Tower is used as a storehouse for art.
Links: en.wikipedia.org
3,357 views