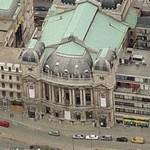 By DonMartini @ 2007-03-31 04:08:22
@ 51.218705, 4.416533
Antwerp, Belgium (BE)
The building of the Antwerp opera house was commissioned in 1899 by the then burgomaster of Antwerp, Jan Van Rijswijck, on the instigation of the composer Peter Benoit and under pressure from a steadily growing group of Flemish nationalists, who wanted a music theatre of their own that would be a match for the French Opera in what is now the Bourla theatre. The architects were Alexis Van Mechelen and E. Van Averbeke. The opera house was built between 1904 and 1907. When the building was inaugurated in 1907, the entrance hall was not yet finished (the marble on the columns and the walls was still missing, and the ceilings of the foyer and the large hall were still without their obligatory painting), but even in that state, the Neo-Baroque building with its sumptuous decoration in Louis XVI style was an instant success with the public, keen as it was for a grand Flemish playhouse.
Links: www.vlaamseopera.be
926 views