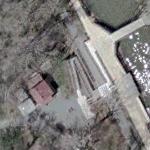 Brothers Joe and Ray Fletcher, the fourth generation of their family to sell bait and tackle and rent boats and bikes from the little shed halfway between the C&O Canal and the rolling river, are retiring at the end of the year, giving up the contract they have had with the National Park Service.

Because of its location, humble Fletcher's has always drawn a diverse crowd. Joe Fletcher rented rowboats to Sen. John F. Kennedy before he was President and later to brother Ted. Bobby Kennedy rented bikes for his brood. President Bill Clinton jogged by and stopped for lemonade. President Jimmy Carter was a regular. Chief Justice William O. Douglas lived just up the hill and stopped by on his famous walks. John Riggins and Sonny Jurgensen have been by several times, as have congressmen beyond numbering.
Links: www.fletchersboathouse.com
1,108 views