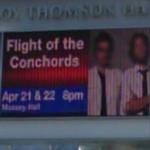 They were named Best Alternative Comedy Act at the 2005 US Comedy Arts Festival and Best Newcomer at the Melbourne Comedy Festival, and they received a nomination for the Perrier Comedy Award at the 2003 Edinburgh Festival Fringe. The duo's live performances have gained them a worldwide cult following.
Links: en.wikipedia.org
462 views