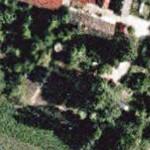 Florian Geyer was a leader in the 16th century peasants' revolt called the Bauernkrieg, and adopted as a popular hero by the Nazis.
Links: www.thirdreichruins.com
663 views