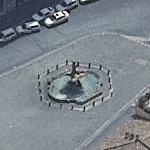 By adrbr @ 2008-03-17 07:49:37
@ 41.90396, 12.488492
Rome, Italy (IT)
Bernini's baroque Triton Fountain ( Fontana del Tritone) is located in Piazza Barberini, Rome, near the entrance to the Palazzo Barberini (now housing the Galleria Nazionale d'Arte Antica), which Bernini helped redesign for his patron Maffeo Barberini, who had become pope as Urban VIII. It is a few blocks from Borromini's San Carlo alle Quattro Fontane. In the fountain, which Bernini executed of travertine in 1642–43, an over-lifesize muscular Triton, a minor sea god of ancient Greco-Roman legend, is depicted as a merman kneeling on an opened scallop shell. He throws back his head to raise a conch to his lips: from it a jet of water.
Links: upload.wikimedia.org
791 views