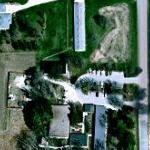 The museum and arboretum were originally developed on 5 acres (20,000 m²) in the 1940s by Eugene Hastie, a farmer and local historian of Dallas County. He planted his arboretum in straight lines to allow farming between the trees, and in 1953 opened his museum to the public. In 1966, the Dallas County Conservation Department purchased the site, and has subsequently added another 12 acres (49,000 m²) of re-established prairie and wildflowers.

The arboretum contains over 100 species of primarily native trees and shrubs.