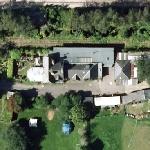 What's left today:
The station building is still extant, but now used as a private residence. The plaforms are also still there with the actual rail still placed at the up side, but not in use.
Links: www.disused-stations.org.uk
431 views