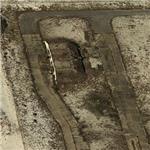 By kjfitz @ 2009-02-24 08:37:52
@ 30.389435, -86.809848
Eglin AFB, Florida (FL), US
On December 1, 1957, Eglin AFB became home to the newly established Air Proving Ground Center. At this time, the Air Research Development Command was proceeding with plans to move additional testing and evaluation of the BOMARC surface-to-air missile from Canaveral Air Force Station to Eglin’s Hurlbert Field located across from Santa Rosa Island along the West Florida Gulf Coast. Preliminary planning for this move had started back in October 1955. Site construction at Hurlbert had been in progress since March 1957 and by 1958 the field hosted missile ground testing and personnel training facilities. Meanwhile, launchers were constructed so that BOMARCs could be fired into what became known as the Eglin Gulf Test Range. The first BOMARC launch from Santa Rosa Island occurred on January 15, 1959. From 1959 through 1960, the BOMARC A underwent continual testing at this site, flying against various drone aircraft.

The CIM-10 Bomarc (originally IM-99) was the product of the Bomarc Missile Program. The Program was a joint United States of America–Canada effort between 1957 and 1972 to protect against the USSR bomber threat. The Bomarc was a joint development with Boeing and Michigan Aeronautical Research Center. It involved the deployment of tactical stations armed with Bomarc missiles along the east and west coasts of North America and the central areas of the continent. BOMARC and the SAGE guidance system were phased out in the early 1970s since they seemed to be ineffective and costly.
Links: en.wikipedia.org
1,509 views