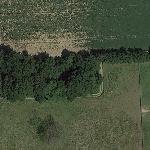 During WWII the railway was closed to passengers and the military used it for transporting military cargo, but Bourne Park Tunnel had been used to store a massive Railway Gun called Boche Buster. The gun could fire 1.4 ton shells over a 12 mile distance.

Today the two tunnel portals have been blocked by a metal fence and the trackbed in the cuttings on both sides of the tunnel are overgrown.
Links: www.disused-stations.org.uk, en.wikipedia.org
709 views