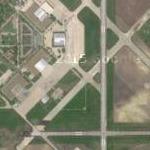 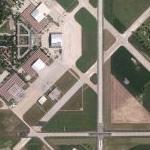 By kjfitz @ 2005-08-15 15:44:55
@ 40.298251, -88.144083
Rantoul, Illinois (IL), US
Chanute Air Force Base is located on the southern edge of Rantoul (Champaign County), Illinois. The main Base is comprised of 2125 acres. The primary mission of the AFB was to provide military and technical training for Air Force officers, airmen, and civilian employees, and for other Department of Defense agency personnel. Training activities focused on operation and maintenance of military aircraft and ground support equipment.

Chanute Field (640 acres) was constructed, initially serving as a pilot training facility and a storage depot for aircraft engines and paint in 1917. From 1922 through 1938, Chanute served as a training school for all Air Corps mechanics. The Air Corps Technical Training Command was initially headquartered at Chanute in 1941. Technical training operations during World War II included aircraft maintenance, weather observation, life support, and metal processing.

Following World War II, Chanute continued to serve as a training installation for aerospace and weapon system support personnel under a variety of organizational titles. The installation was designated in 1959, the Chanute Technical Training Center, which was later designated the 3330th Technical Training Wing. In July 1971, military flight operations were terminated at Chanute, and it became a non-flying training Base. All military operations ceased in September 1993, and the facility became available for other uses, including civilian and commercial. The Air Force Base Conversion Agency (AFBCA) currently oversees all Base closure and conversion activities, in conjunction with the Illinois EPA and U.S. EPA.
7,714 views