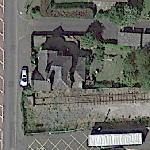 What's left today:
For a long time the platforms did survive, but they have now been demolished. The station still remains, but now used as a private residence. The track in front of the station building still remains, but has been lifted on the other side of the level crossing.
Links: en.wikipedia.org, www.disused-stations.org.uk
302 views