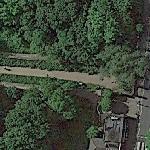 What's left today:
Both platforms remain. There also three bricked up windows and a door on the side of the road bridge below the statio buildings. Parts of the station building also still remain at street level.
Links: en.wikipedia.org, www.disused-stations.org.uk
338 views