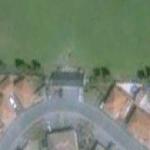 What's left today:
The station building has been demolished. However, the platform remains and is currently being used as a boundary wall between gardens and a football pitch.
Links: www.disused-stations.org.uk
352 views