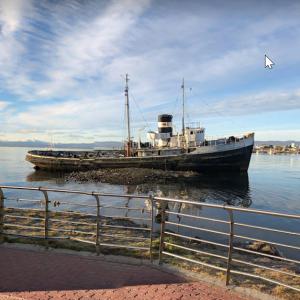 The vessel was ordered by the U.S. Navy as an ATR-1 Class Rescue Tug (Auxiliary Rescue Tug). It was constructed by Camden Shipping Shipbuilding & Marine Railway Co. in 1943 with a wooden hull and was intended to become U.S. Navy ATR-1.

However, it was never commissioned into the U.S. Navy but instead was transferred to the Royal Navy as part of the wartime lend and lease scheme which was approved by the U.S. Congress in March 1941.

During WWII, HMS Justice as she became, served as a recue tug in the Royal Navy and some authorities suggest that she took part in the D-Day Landings in June 1944.

After the war, in March 1946, HMS Justice was decommissioned by the Royal Navy and handed back to the U.S. Navy, becoming BATR -20. Again, her service was short and in July 1946 she was decommissioned and sold on in October 1947. Upon the sale she was renamed ‘St. Christopher’ and flagged in Costa Rica.

In 1953 the ‘St. Christopher’ was chartered by the Argentine Navy for several salvage operations. However, the following year she suffered rudder damage and engine problems and was laid-up in the Argentine port of Ushuaia.

In 1957 for reasons unknown the ‘‘St. Christopher’ was grounded and abandoned and in May 2019 was still in the same position a short distance offshore.

The wreck has become something of a landmark and tourist destination.
Links: www.google.com, en.wikipedia.org, www.placesandfoods.com, www.wrecksite.eu
40 views