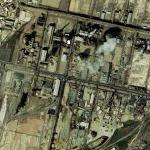 From 1971 to 1988 ICI operated a small General Atomics TRIGA Mark I nuclear reactor at its Billingham factory. It also operated the coal-fired North Tees Power Station designed by Giles Gilbert Scott on the banks of the Tees to provide electricity for its plants. This was eventually decommissioned and demolished in 1987. The site of the power station is now Billingham Reach Industrial Estate, an international wharf owned by Able UK Ltd.

ICI no longer operates in Billingham having sold many of its businesses during the company's restructuring of the 1990s. Some of the company's former manufacturing plants are still in operation, run by other chemical companies.
Links: en.wikipedia.org
1,256 views