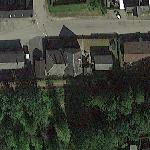 The railway closed because it never had many passengers using it.
Links: danskejernbaner.dk, da.wikipedia.org
331 views