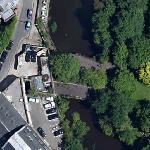 What's left today:
The station building was destroyed by a fire in 1968, but the foundations and lower walls still remain today. Next to the station building you can still clearly see where the footsteps down to the platforms were once located as it has been bricked at street level. At track level nothing remains, but next to the location of where the platforms would've been, you can still see the bricked tunnel portal - this tunnel would have once taken trains into the Botanic Gardens Station (now closed).
Links: en.wikipedia.org, www.kilmeny.vispa.com
349 views