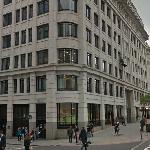 What's left today:
The original station building was demolished sometime in the 1930s, but the old station was converted into an air-raid shelter during WWII. Today you can acess the station via a manhole in the basement of Regis House (that now occupies the site) this leades to the original iron spiral staircase down to platform level. The old tunnels are also still here today, but when the Jubilee line was extended the old southbound tunnel was cut through for a ventilation shaft.
Links: en.wikipedia.org, www.abandonedstations.org.uk
344 views