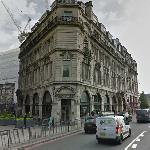 What's left today:
The station building at ground level still stands, but is now used as a bar. The southern entrance to the station has been opened as a pedestrian walkway under the road. Only one platform (eastbound) still remains, as the other platform was demolished as changes to the track was being made. The eastbound platform can still be accessed, but only for people working on the tracks. If you use the pedestrian walkway you can see a security door with warning signs on it. The door leads to the remains of the station at track level.
Links: www.abandonedstations.org.uk, en.wikipedia.org
911 views