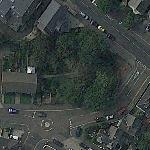 What's left today:
The station building has been demolished. The long section of the sweeping platform edge still remains. The trackbed has been filled up to platform level. The southern part of the station has become part of a housing estate. The tunnel portal is also still there, but bricked up and used as a shooting range for a local gun club.
Links: www.disused-stations.org.uk
392 views