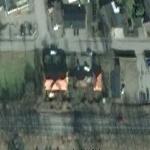 The station had a two tracks go through the site, two low platform and a medium sized station building.

What's left today:
The platforms have been demolished to make room for the Klippanvägen, main road 13. The road follows most of the former trackbed and passes through the former station site. The station building is also still there, but now as a private house.

What the station would've looked like:
http://www.historiskt.nu/diverse/vykort/munka_ljungby_01.jpg
Links: dan.wikitrans.net
363 views