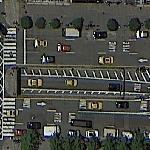 The tunnel originally was built as an open rock cut that was completed in 1834. In the 1850s a roof was added over the cutting, thus the tunnel we know today.