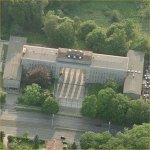 By mlc1us @ 2010-02-27 12:27:54
@ 52.24236514, 10.52680108
Brunswick, Germany (DE)
A "Reichsakademie für Jugendführung," or Adolf Hitler School for Hitler Youth Leaders, was built in Braunschweig (Brunswick) in1937-39. Designed in classical style by architect Erich zu Putlitz, the complex was meant to be an elite school to train future leaders of the Third Reich. The Academy opened shortly before the beginning of World War II, and was used during the war as a training school for the female labor service and Hitler Jugend (BDM), as a Luftwaffe hospital, and finally as a school for disabled soldiers. The Academy exists today, virtually unchanged, as the Braunschweig Kolleg on Wolfenbüttleler Straße, an adult education facility
819 views