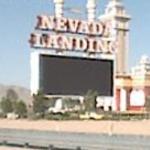 By GlobalPlayer @ 2010-04-25 05:22:54
@ 35.786139, -115.324556
Jean, Nevada (NV), US
The Nevada Landing was a hotel and casino designed to resemble two riverboats. It was located in Jean, Nevada, near the California state line, within sight of Interstate 15. The hotel, owned by MGM Mirage, had 303 rooms, four restaurants, over 800 slot machines (including video poker), live keno, table games, banquet facilities, and wedding services. The rooms featured air-conditioning, telephones, clock radios, private bathrooms, and televisions. The property was typically marketed with its sister hotel, the Gold Strike Hotel and Gambling Hall, located across the I-15 freeway.

On March 20, 2007 MGM Mirage closed the Nevada Landing in Jean almost a month earlier than it originally planned.

Demolition began on the hotel in early March 2008. As of April 2008, the hotel was no longer standing, with the exception of the sign.
Links: en.wikipedia.org
1,157 views