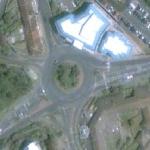 Due to the builiding delay of St. Helier Snow Hill, the station did not open when the railway opened, so the railway company built a temporary station near Green Street.