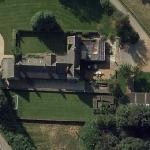 By Drudii @ 2013-07-19 07:41:34
@ 53.912834, -1.333468
Thorp Arch, United Kingdom (GB)
DATE OPENED: 10 August 1847
LOCATION: North side of Church Causeway
COMPANY ON OPENING: York & North Midland Railway
DATE CLOSED TO PASSENGERS: 6 January 1964
DATE CLOSED COMPLETELEY: 10 August 1964
COMPANY ON CLOSING: British Railways (North Eastern Region)
PRESENT STATE: The station is in private residential use and is exceptionally well preserved. Externally it is largely unaltered although an upper floor has been added to the north end of the central section of the station building, and some pointed-arch windows in the former station house have been replaced with rectangular ones. The up platform has been demolished and now forms part of the lawn for the house. The north end of the down platform has also been demolished. The goods shed is extant, complete with a 2x2-bay canopy supported on iron pillars at its south end and, at the north end, two openings and a small out-building. The siding ran through the east side of the shed. The remains of the coal drops can also still be seen.
COUNTY: Yorkshire
Links: www.disused-stations.org.uk
413 views

kjfitz
@ 2013-07-19 11:15:06
We aren't sure. nic is aware of the issue and tracking it down. Meanwhile the mods have a simple way of fixing it and will try to catch them all before they are approved. Sorry for the confusion.