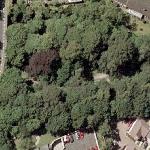 What's left today:
The steps leading down from the road to the station are still there today. A short section of track with a rail mounted crane on it. The Peel bound platform also remains.
Links: www.disused-stations.org.uk
364 views