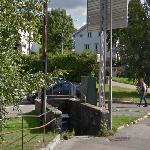 By Drudii @ 2015-04-26 12:38:33
@ 59.932946, 10.703989
Oslo, Norway (NO)
Volvat Metro Station was a rapid transit station on the Oslo T-Bane in Norway. The station was located between the two other stations Majorstuen and Borgen. The station opened in 1936 with two platforms wide enough for only two car trains. When the Røa Line was upgraded to support trains with more than two cars in 1995, trains would not stop at Volvat Station as the platforms were not long enough. The station officially closed in 1997.

What's left today:
The whole station remains. The two ground entrances are still there, but doors are locked to prevent access to the station site. The station platforms and corridors are covered in graffiti. The platforms are in bad condition as piles of rubble has been left on them. The rails going through the site are still active and the station can be seen from passing trains.
Links: en.wikipedia.org
462 views