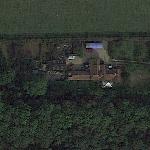 What's left today:
The station building survies today, but is now a private residence. The trackbed has been converted into a cycle path. The down platform still survives, but is heavily overgrown. The station is quite hard to see from the path as the station has had a high fence erected.
Links: www.disused-stations.org.uk
539 views