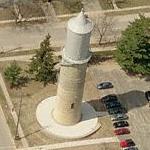 Throughout the nineteenth century, residents in the growing community of Fort Atkinson got their water from the Rock River or from private wells. By 1900, however, many Fort citizens were agitated that our slow town was still without a public waterworks to provide pure water and adequate fire protection. In February of 1901 a referendum on the waterworks won by a whopping 6 to 1 margin and a waterworks system was constructed with a marvelous new water tower on High Street. The 80 foot elevated tank held 100,000 gallons and it remained in service until 1988. Though no longer in use, the old water tower serves as a visual reminder of the beginning of city services and the birth of the modern city of Fort Atkinson.
Links: en.wikipedia.org
639 views