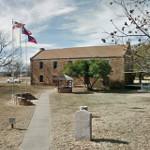 By WacoKidd110 @ 2013-09-13 06:51:24
@ 33.150601, -98.740779
Newcastle, Texas (TX), US
Fort Belknap, located near Newcastle, Texas, was established in 1851 by brevet Brigadier William G. Belknap to protect the Texas frontier against raids by the Kiowa and Comanche. It was the northernmost fort in a line from the Rio Grande to the Red River. The fort functioned as a base of operations rather than as a fortified point, and it became the center of a substantial network of roads, including the Butterfield Overland Mail.
Links: en.wikipedia.org
444 views