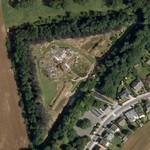 By Dania @ 2011-03-13 01:31:41
@ 50.674563, 5.49252
Loncin, Belgium (BE)
The Fort de Loncin is one of twelve forts built as part of the Fortifications of Liège in the late 19th century in Belgium. It was constructed between 1881 and 1884 according to the plans of General Henri Alexis Brialmont. Contrasting with the French forts built in the same era by Raymond Adolphe Séré de Rivières, the fort was built exclusively of unreinforced concrete, a new material, rather than masonry.

The experimental nature of the new material, and the design features of the fort, led to unintended consequences in combat action. Weak concrete made the fort vulnerable to enemy artillery, while poor living conditions reduced the fort's ability to operate under fire. The fort was destroyed during World War I in the Battle of Liège, when the fort's magazine was hit by a large-calibre German shell, killing most of the fort's occupants. The event marked the debut of the Big Bertha howitzer in combat. Relatively few of the dead were recovered; the site is now a military cemetery.