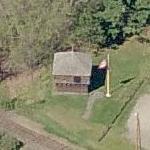 By mlc1us @ 2009-05-30 15:19:46
@ 44.539264, -69.628746
Winslow, Maine (ME), US
Fort Halifax was a fort on the north bank of the Sebasticook River. Its blockhouse, which survives, is the oldest blockhouse in the United States. It was part of a garrison built by the Province of Massachusetts Bay in 1754-1755 at the outset of the French and Indian War. On July 25, 1754, Major General John Winslow arrived with a force of 600 soldiers to establish the fort at the confluence of the Kennebec River with the Sebasticook River. The palisaded defense was intended to prevent Quebec and its Native American allies from using the Kennebec River valley as a route to attack English settlements.
Links: en.wikipedia.org
700 views