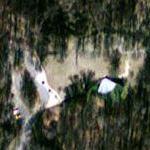 Because of its strategic location, controlling traffic on the Mississippi River, the fort was attacked and captured by the Union Army, which controlled it during most of the war. An exception to this control occurred for less than one day immediately after the Battle of Fort Pillow in 1864.