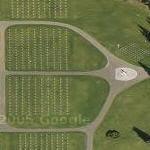 Perhaps the most famous resident of Fort Richardson National Cemetery was Kermit Roosevelt, son of the 26th U.S. President, Theodore Roosevelt. Kermit, who had held previous commissions in the Army, was assigned to Fort Richardson with a specific billet but worked hard to create a niche for himself. He often accompanied pilots on their missions over the Aleutian Islands and played an active role in recruiting the native Alaskan tribes to join a territorial militia. Roosevelt died at Fort Richardson June 3, 1943. His wife, Belle Roosevelt, advised then Chief of Staff General Dwight D. Eisenhower, that she wished for Kermit to be buried at the site. His father, she conveyed, had always said: “Where a tree falls, there let it lay.
Links: www.cem.va.gov
1,050 views